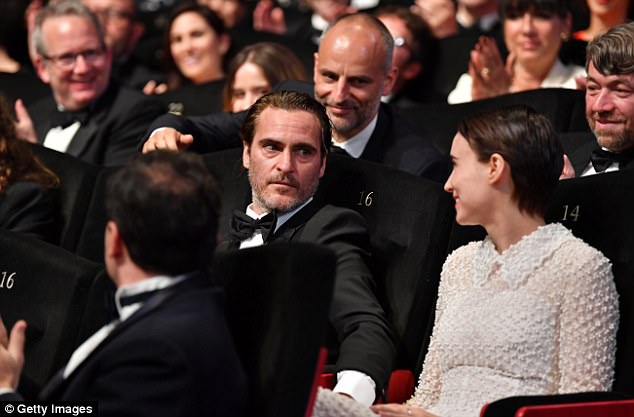 You know what they say? There’s no better way to confirm a Hollywood romance than attending a mega public even together and – Rooney Mara, 32 and Joaquin Phoenix, 42, have done just that by attending the 70th Annual Cannes Film Festival Closing Ceremony together.

The multiple Oscar nominee and his beautiful possible-girlfriend and Mary Magdalene co-star, showed off a what seems to be a cozy and tender relationship, as they celebrated his win for Best Actor for his role in You Were Never Really Here and then leaving the party in the same car. Following a bash where they celebrated his winning night, the duo was spotted leaving hand-in-hand, not shying away from another show of how close they have gotten.

The two were definitely not keeping things safe while inside the ceremony, chatting the evening away while sporting very revealing grins and Phoenix, reportedly, placing his hand on Mara’s leg at one point.

The actor seemed genuinely surprised by his win, turning to his rumored girlfriend with a puzzled look on his face as his name was read. They shared a warm embrace, before he went up on stage to accept the great honor.