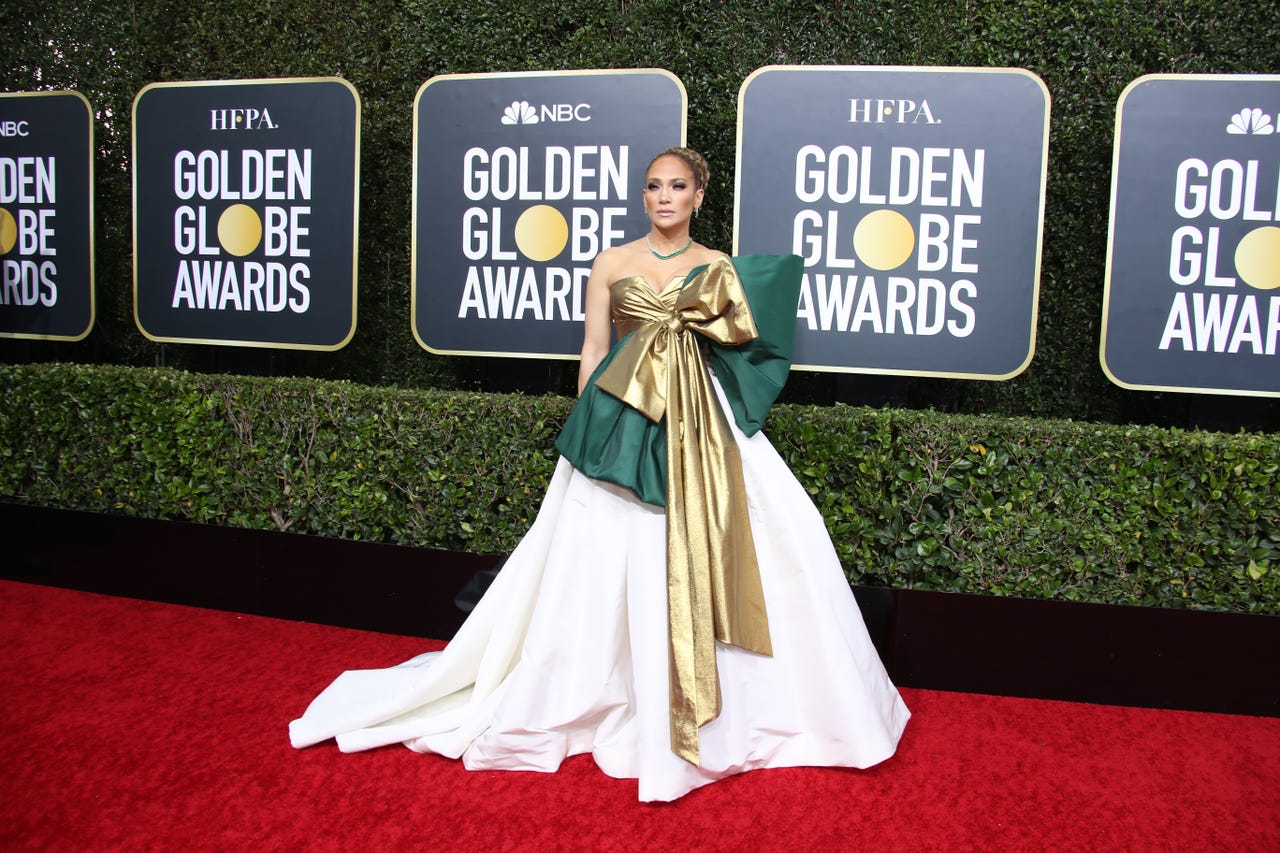 Fineee! Turns out we botched those predictions, majorly. The only one that kinda happened, albeit super loosely, was the Pitt/Aniston whateverthatwas.

Frankly, after watching the show last night, we’ve kind of lost our desire for that reunion…among several other things.

But let’s take one bite at a time, shall we?!

Not so much the award-loss (well deserved by the sublime Laura Dern, of course!) but – J. Lo? Jenny? The almighty queen that we bow down to and expect nothing short of a complete and utter red carpet domination, as per usual? What was THAT, last night?

Valentino? Sure! But, the layers, the huge bows, that Christmas gift wrapping paper color scheme? Really? For your BIG night?! And then the braided bun to top it all off – but, we’re not going there (too blinded by that dress, still, TBH). Listen, we get it. Even the very best sometimes fail. It’s good to know, actually, that even you (we see you, Rob Zangardi!) can (gulp!) make a red carpet miss and that. is. OK. We all just have to accept it and move on. You just focus on getting that Oscar nom now. And slaying that red carpet, baby! As A-Rod said, you are a champion! Keep on killin’ it mama!

Also, to lessen the pain of the humongous Lopez dress debacle, we can always turn to, what seems to be a safe and dependable (thanks, G.P.!) destination for a red carpet faux pas – Mrs. Gwyneth Paltrow. The Goop mogul brings it each and every time. And when we say bring, we mean brings the most inexplicably awkward styling choice that seems totally right on paper, but somehow fails to deliver that desired punch. Kind of like G. P. herself, wouldn’t you say?

This time around, Paltrow opted for a re-imagined version of the largely trendy naked dress, this one designed by Fendi. Soooo close, but no cigar for you, missy. Sorry.

And the winners were…

The Hollywood Foreign Press did what they do best: made some safe and expected choices but also sprinkled a whole bunch of surprises in terms of who got to walk away with the little statue, post a full-on vegan meal that was served during the ceremony, that proved to be a stellar PR move as pretty much anyone who jumped on the podium didn’t neglect to mention it, while praising the HFP. Sly move, congrats.

To find out who won in every single category, we suggest you check this out.

The Top moments of the broadcast (we’re sure the best moments happened at the after parties, but that juice will need some time to come out)

Ricky Gervais proved, once again, that he cannot be beat as a host. He went all out with his opening speech, warning the crowd, to be fair, that they’ll have a few laughs at “their expense.”

“I came here in a limo, and the license plate was made by Felicity Huffman,” joked Gervais, referencing the Desperate Housewife star’s recent prison stint after being convicted in the college admissions scandal.

So, it wasn’t Meryl Streep that would make history with another win. Sorry Meryl, suppose you can find some comfort within the gazillion awards you’ve earned throughout your career?! Also, there’s always next year.

History was made, however, and this moment went to rapper/actress Awkwafina, who became the first woman of Asian descent to win a Golden Globe for best actress in a comedy film, for her performance in The Farewell.

Big up to her.

The award for weepiest speech goes to….Tom Hanks, bien sur! OK Tom, we’ve know each other wayyy too long for you to be playing the “I have a pretty rough cold and that is the reason why I’m crying in my lifetime achievement award speech in from of my wife of 31 years and my five children, in a room full of my peers and a the world that adores and respect me,” card. Okay!?? ‘Nough said.

We’re also pretty torn when it comes to the moment when Ellen DeGeneres received the Carol Burnett award. Yes, Ellen is love. She da greatest. Love her deeply. However, the moment that kind of got to us more was the way Kate McKinnon introduced Ellen, by providing a very emotional recount of how the comedienne had inspired her to not only come out but also feel that she too can be a part of the entertainment industry – and feel worthy in general, while belonging to the LGBTQ community. Both McKinnon and DeGeneres could barely hold it together during that speech and frankly, we were right there with them.

Best Actor in a Motion Picture Drama winner, Joaquin Phoenix accomplished several things with his acceptance speech. In a true Joker-esque fashion (we had to!) he managed to pack a myriad of emotions into his speech, including a number of f-bombs, keeping them censors alert and bleep-ready. He ensured he paid deep respect to his fellow nominees, gave a sweet nod to his girlfriend Rooney Mara and politely asked his peers in the audience to do their best in truly contributing their efforts (and not just verbally acknowledge) the environmental heartache happening globally (namely the Australia wildfires) by skipping a private jet ride or two, if they may.

A pretty significant upset was not a personal one (though, some would argue differently), but one for a streaming service that is (let’s face it) our boyfriend/girlfriend on most nights.

Netflix went into the night with 34 total nominations — leading the pack of any other studio — and ended up with just two scores: Laura Dern won for her role in Marriage Story (beating J. Lo, sigh) and Olivia Colman received the top honors for her portrayal of Queen Elizabeth II on The Crown (canceling out Aniston and Witherspoon who were touted as favorites, for the turns in The Morning Show).

The streaming giant also lost out in perhaps the most sought-after award of them all: Best Picture, Drama, which went to Sam Mendes’ 1917, besting The Irishman and Marriage Story, which seemed to be frontrunners.

Needless to say, the foreshadowing of what is to come in the remainder of the awards season is not completely murky and unpredictable. The Globes are knows as the major scene-setters but it’s also a known fact that the HFP and the Academy voters sometimes get the greatest kicks out of switching it up on each other. Let’s hope this is one of those years.

Another hope is that Jennifer Lopez’ style team gets a grip on it. And fast.